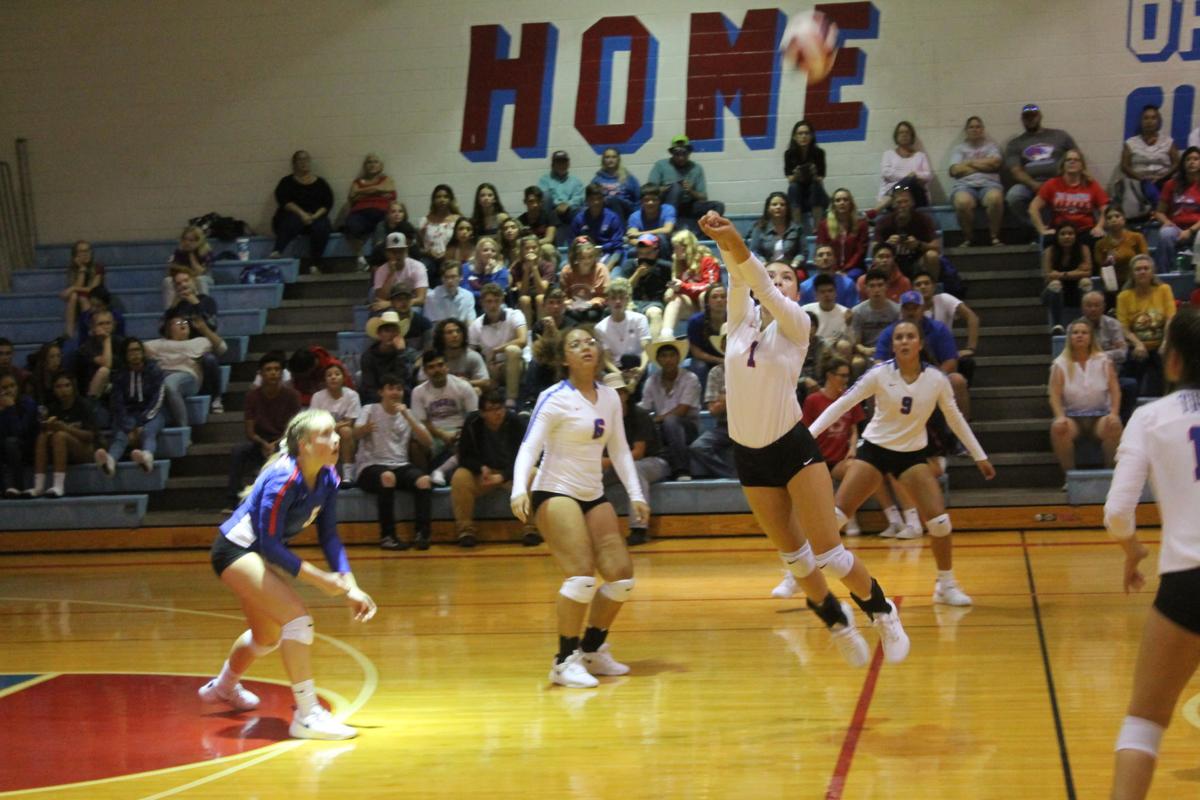 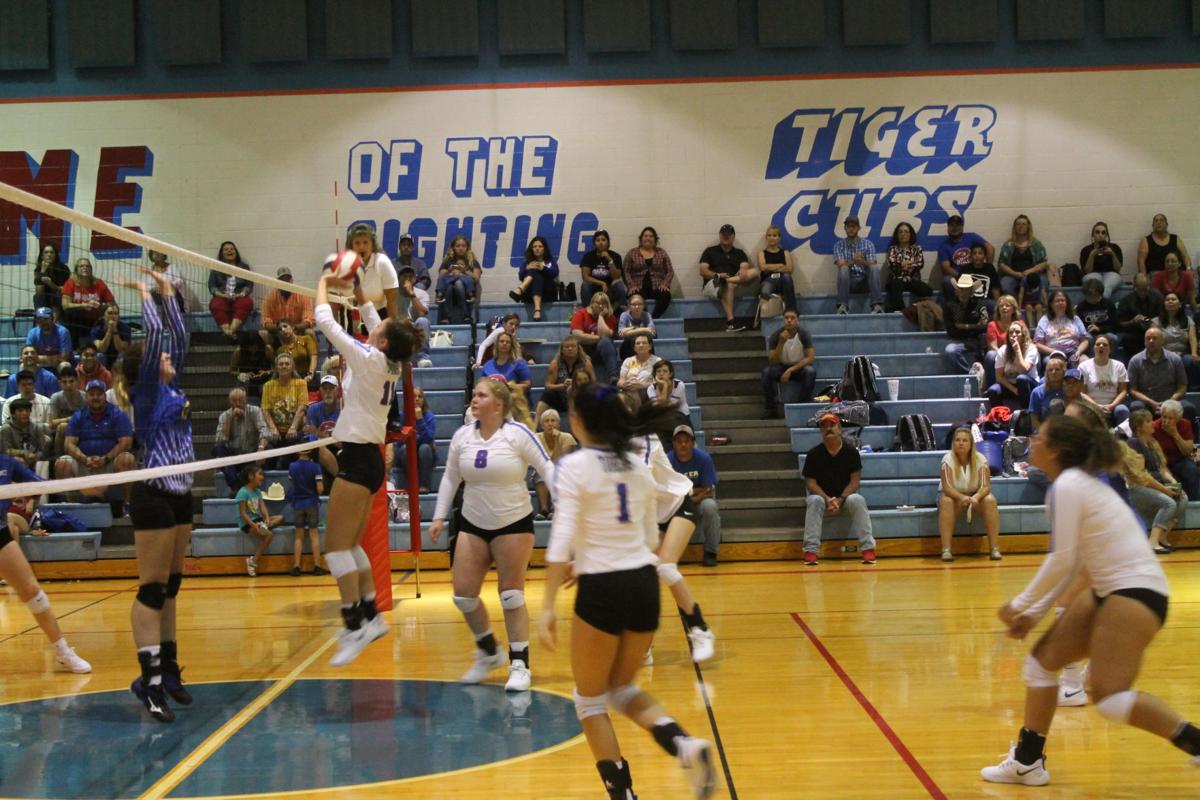 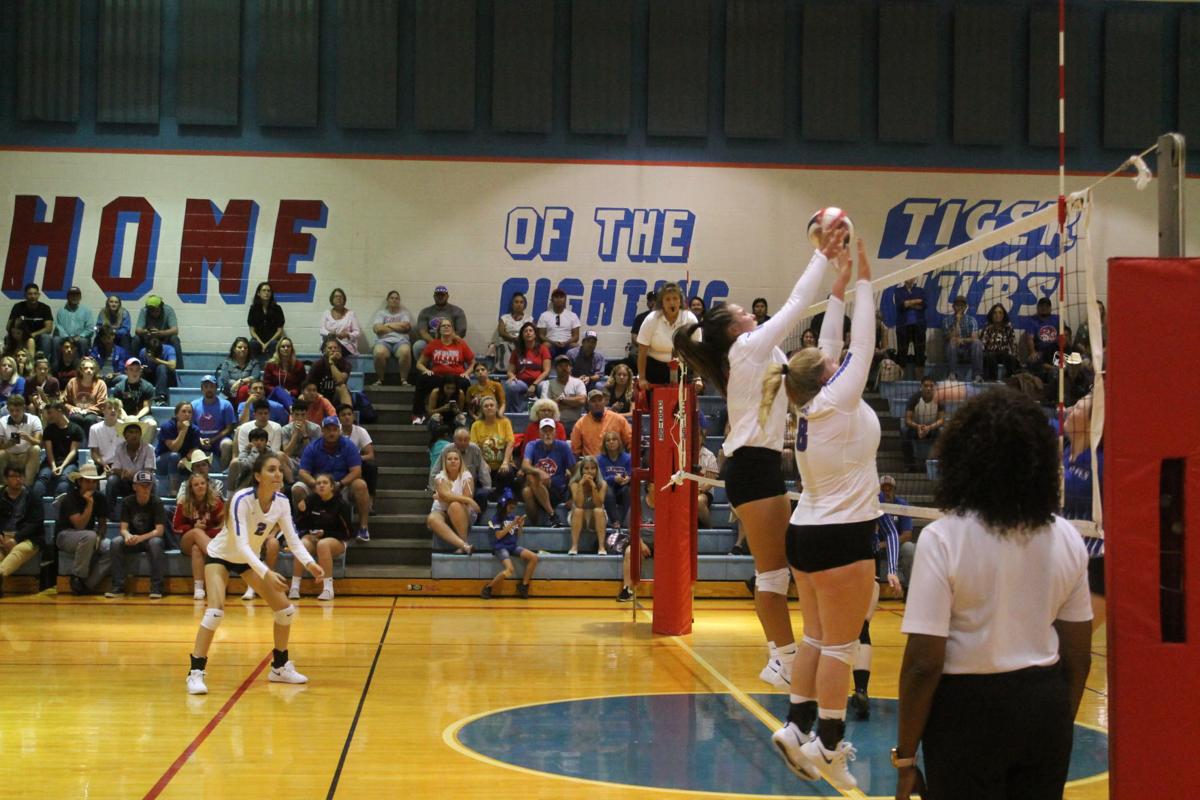 Sometimes the real story isn’t in the wins and losses, and some- times the storyline has to be adjusted due to unexpected circumstances. This was the case for the Tigers volleyball Varsity and JV home opener this past Tuesday, September 10. What

was meant as a celebration be- came something a bit different when the rain clouds opened up shortly before the match with visiting Mesilla Valley was due to start.

Due to the intensity of rain, every possible leak in the high school’s gym was quickly discovered. After determining that the new gym had enough puddles growing on the court, it was decided to move to the old gym, with teams, officials and fans dis- assembling the nets and heading down the corridor to set up there. Unfortunately, the story was much the same there, and it was quickly decided, in the interest of the safety of the athletes, to make one more move, this time, across the street to the middle school gym, where their teams were just finishing up their own home match.

It was a late start as fans slowly filled the stands. With the JV up first, they put a veteran lineup on the court, Cassie Apodaca, who also plays varsity, Madison Green, Megan Oldfield, Angela Valdez and Brooklynn Garcia at the libero position.

In the first set, the visitors took the first point, then, with Apodaca serving, the Tigers built a 4-1 lead. The lead see-sawed back and forth, staying close until at 15-10 the Tigers fell be- hind, and then they took over. With Green serving and the teams solid front court line hold- ing strong, and several key digs by libero Garcia keeping the volley alive, the team evened the score at 15 all. It went back and forth, with the Tigers up a point or two, and ties until at 21-20 Tigers, our home team took over and pushed it to game point, 24- 20, a long volley as the visitors struggled to stay in it ended with a Tiger win, 25-20 for the set.

In the second set, the Tigers jumped to a 4-0 lead and never looked back, taking the set 25-15 and with it the match in straight sets.

The varsity was next up at the top of the card. For their home opener they faced the task of taking on last years, state semi-finalists. Mesilla Valley is a team packed with veterans from last year, but if the assignment seemed daunting, our Tigers never showed the least bit of apprehension. They treated the fans to a battle as intense as the storms that raged outside the gym. Fresh off a tournament at Moriarty where they took on elite teams from bigger schools and performed well, these Tigers were ready.

dropping two points, they took over serve and senior setter Hearn delivered, giving the Tigers their first lead, at 4-1 be- fore giving up the serve.

The biggest lead held by either team in the first set was with the Tigers up, 16-11. Other than that, it was a tight battle, with lead changes and ties and no one giving an inch. If the state con- tenders came in expecting an easy win, they were quickly schooled to the realities of Tiger Volleyball by our varsity team. The front line was solid and powerful regardless of who was in the rotation. Starters Garcia, Hearn, Woods, Sheele and Cybulski could be subbed out for Jo- hanna Chapman, Kelsie Paul or Carina Apodaca without skip- ping a beat. Though the Tigers dropped the first set, it went long, with the final score being 27-25, teams needing to win by two points in sets played to 25.

The second set also went long. The Tigers were down 24-17, with the visitors needing only a single point to win, when our Tiger athletes dug down deep, refusing to give up anything, until it was a tie score, 24-24. This tie however, when the set was over, it was a Tiger win, 27-25.

The third set was looking good for the home team with the Tigers holding the lead from the outset until the visitors finally caught up to them, at 19-19. Then they pulled ahead and took the set, 25-19. From there, the visiting team kept control and showed why they are considered one of the elite teams of the state. They won the fourth set by the same 25-19 score, and with it the match.

Despite the loss, which no Tiger team wants to endure this Tiger team shows all the signs of realizing the potential that has been there for several years. They competed from beginning to end, they new their roles, were as tightly woven a Tiger volley- ball team as I have seen. They worked together, supported each other with the bonds of a veteran team that has been through the tempering fires and come out as the real deal. They are going to be exciting to watch.

Next up for our Tigers is a trip to Lordsburg on Tuesday where the V will start the action at 5 p.m. As we go to press, the team is away at Magdalena.