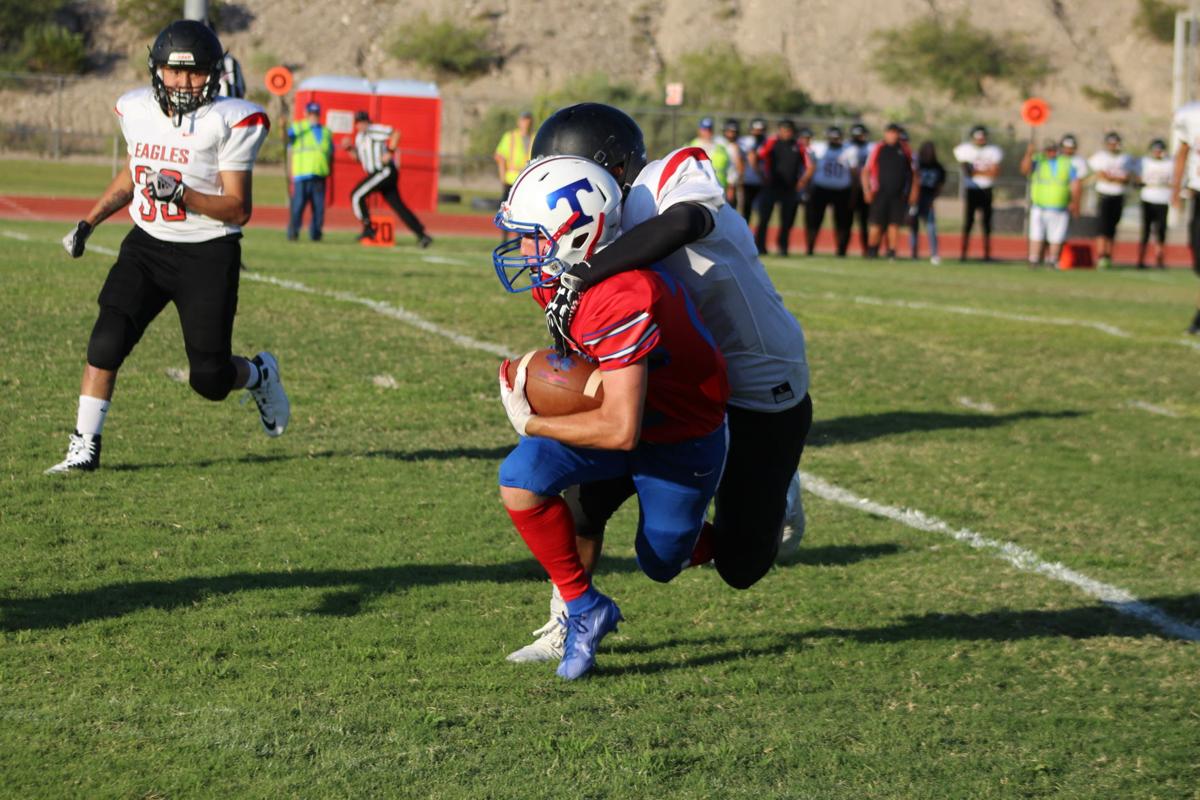 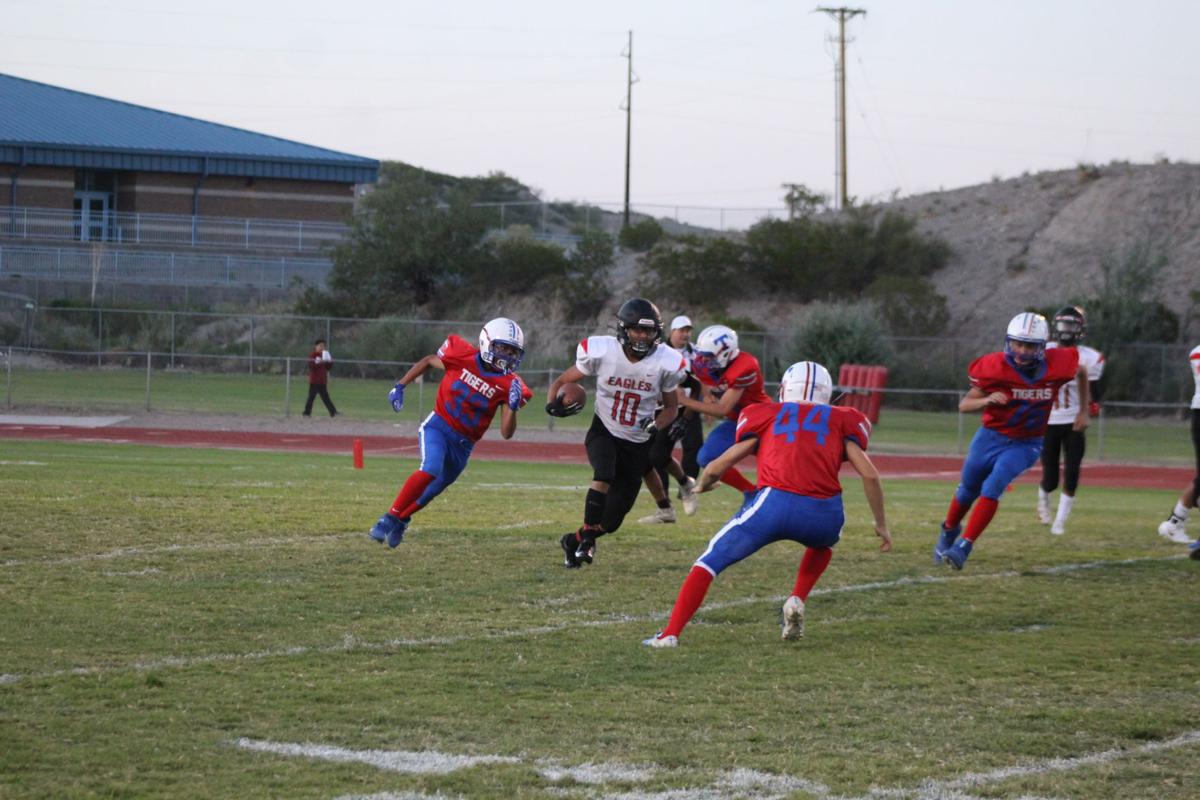 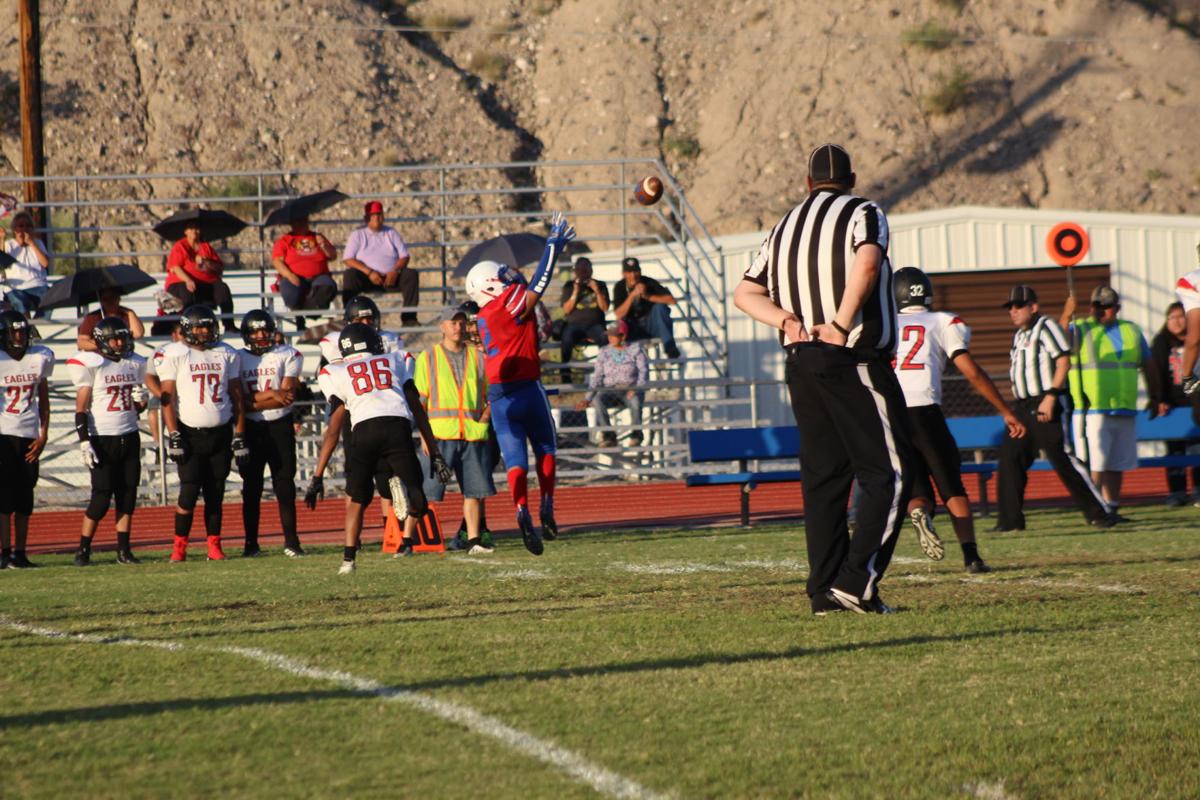 It was the homecoming game and once again, the Tigers took care of business. The lopsided 44- 0 win gave the Tigers a chance to really showcase its multi-faceted arsenal of offensive weapons. It also let the coaches get a look at some athletes further down the bench, with important minutes in prime time and to get some seasoning that will no doubt prove valuable later when district action starts next month.

From the kickoff the Tigers dominated, when electing to receive, Tigers fullback Staten Castillo picked up the ball on the 23-yard line and ran it up 24 yards to give the team excellent

mid-field position for their open- ing drive. That initial drive didn’t last long. On first down quarter- back Benito Villa picked up five yards on a QB keeper. He followed this up with a short bullet pass to running back Cameron Zamora who snagged it on the 40 and took it all the way in for the first Tigers touchdown. After just 51 seconds the Tigers were up, 6-0.

It was three and punt for the Eagles, never getting to midfield. Punting to the Tigers, it was picked it up on the 15, they gained ten yards off a Crownpoint penalty. They weren’t waiting around, however and on the next play Villa kept the ball, drove around the left side and up 75 yards into the end zone. This time, his pass to Nick Mcilrath was good and added two more

points after touchdown and it was Tigers, 14-0 and still eight minutes and change to go in the first quarter.

Each of the Tigers first four possessions ended in points. The third was a great Villa pass, 25- yards into the end zone where wide receiver James Childress made a spectacular leaping catch and brought it down clean for six. Villa put the cherry on top, rush- ing in himself for the two-point conversion after.

The Jesus Gomez kick to Crownpoint after scoring ended up in Tiger hands when Devin Gonzalez came up with the live ball after Crownpoint failed to control it. This set up the fourth Tiger’s TD of the quarter with a short Villa pass completed to Gomez who took it on in ten yards for the score.

In the second quarter it was more of the same. A 31-yard pass play to Gonzalez, who sprinted to one yard out before being brought down was finished off by Zamora who took it the rest of

the way in on the next play. When the teams retired to the locker rooms it was Tigers all the way, 41-0.

With a lead that big, the second half gave Head Coach Daniel Terrazas and the coaching staff the luxury of putting in the rest of the Tigers, who might not get that many minutes, but who still will be counted on to step in and step up at a moment’s notice. This chance to assess athletes and give them quality minutes to both show what they are capable of and improve with real game time will pay dividends as the season progresses.

Relief quarterback Josiah Tid- well proved himself capable of handling the pressure. The ball stayed on the ground and the clock kept running throughout the second half. The final points being provided once again by Villa. Living up to his nickname, “Superman” came in to kick a 23- yard field goal sealing the winning score at 44-0.

In all, Via completed on seven of nine attempts, for a total 158 yards ad three touchdowns. He rushed for another 78 yards and two touchdowns. Also coming up big with the running game were Tidwell with 41 yards and Castillo who added another 37. All five Tiger receivers had passes thrown their way and all connected with at least one. Notably of course, were Childress, Gomez and Zamora who took theirs into the end zone.

Once again, the Tiger’s line came up big. The Blue Swarm earned two sacks for 12 yards, and forced two fumbles, with Josmar Avalos and Childress each coming up with one to give the Tigers possession. The

Swarm gave up no points, and only allowed Crownpoint three third down conversions. It was rare for the visitors to see the scoring side of the 50-yard line, only getting over midfield on two possessions in the game.

Next up for our Tigers is Lordsburg where they are traveling to as this issue of the Sentinel hits the streets. Kickoff is set for 7 p.m. If you can make it, the team would love to see some Tiger fans in the stands.