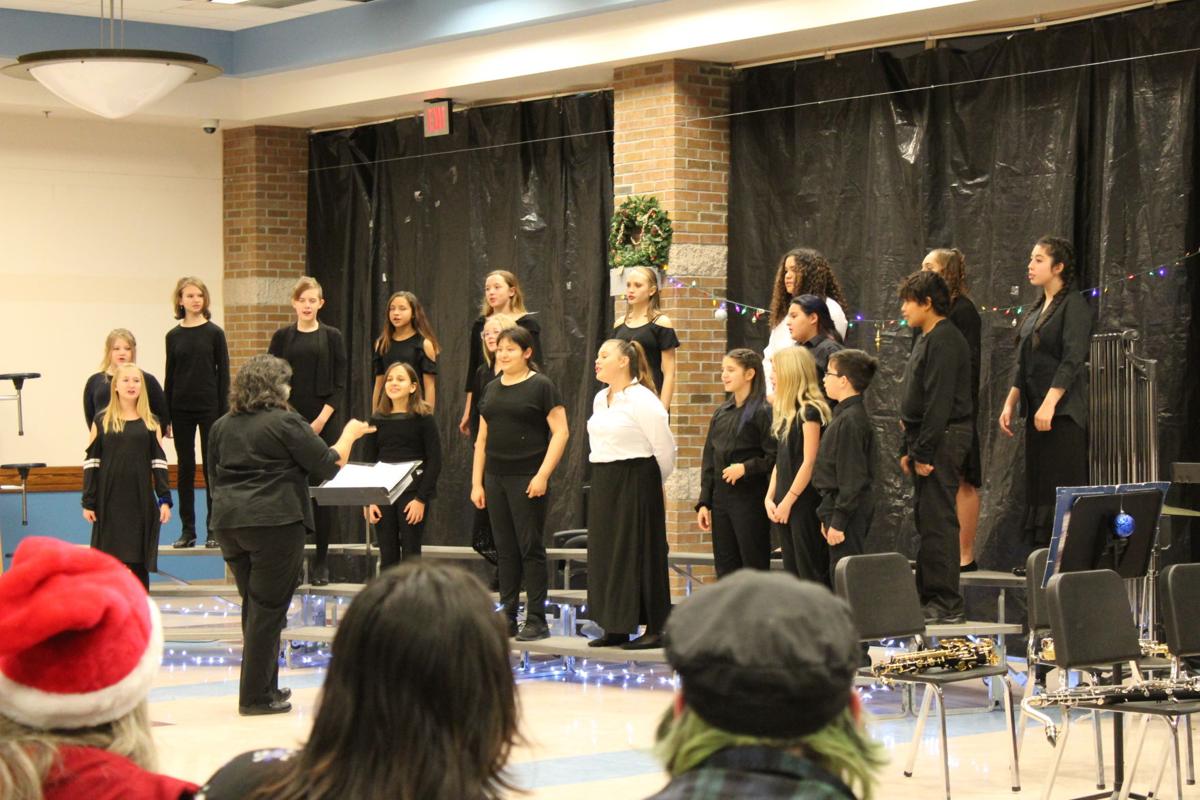 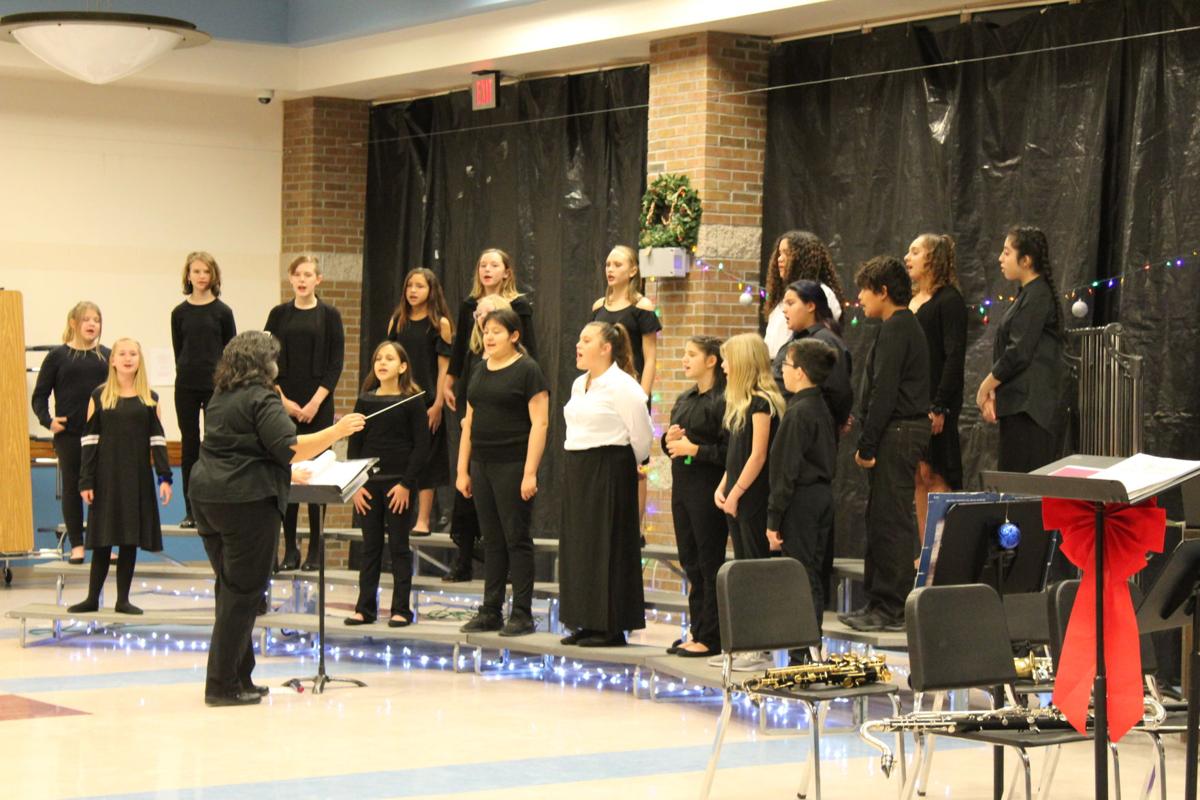 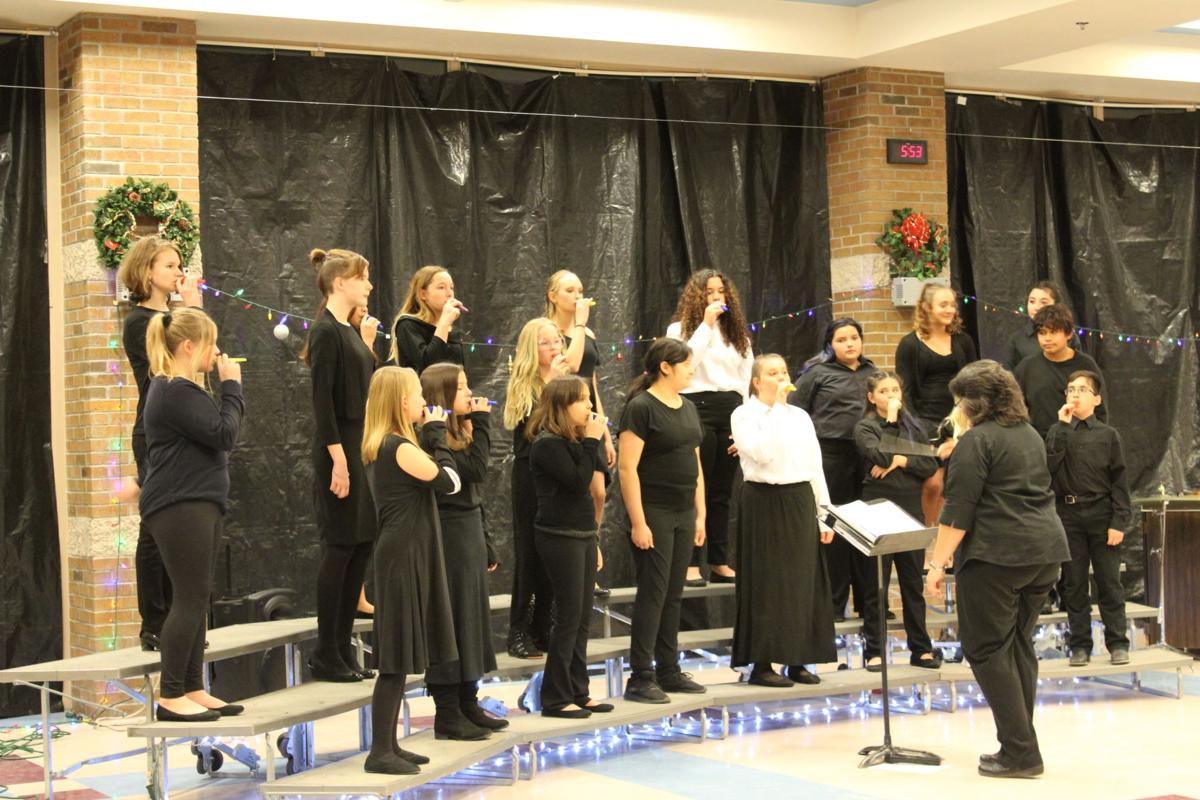 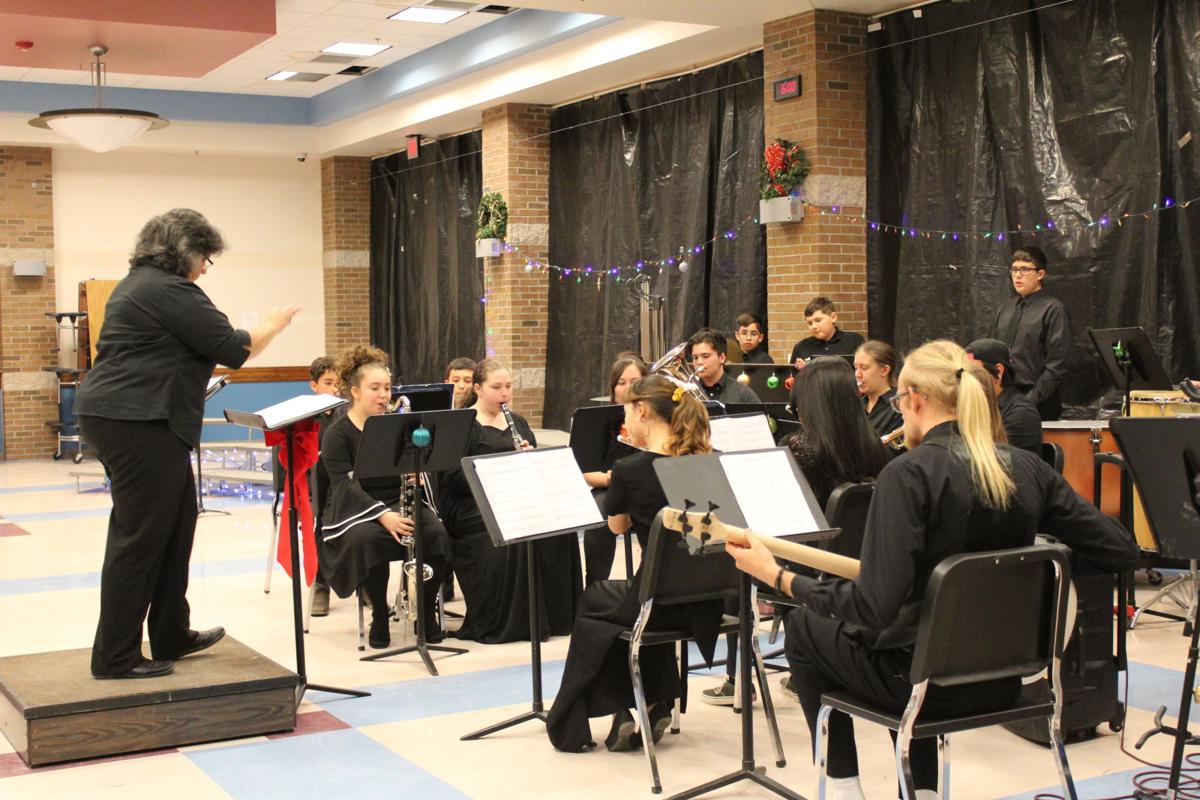 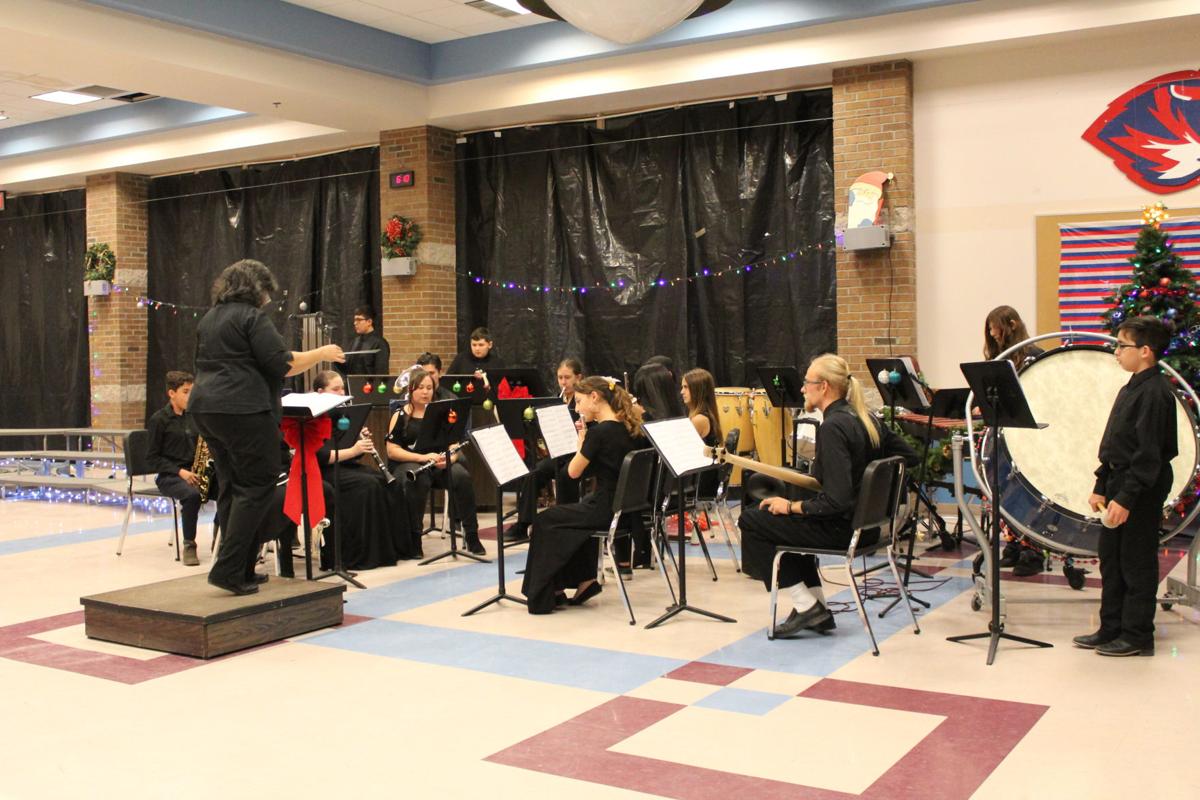 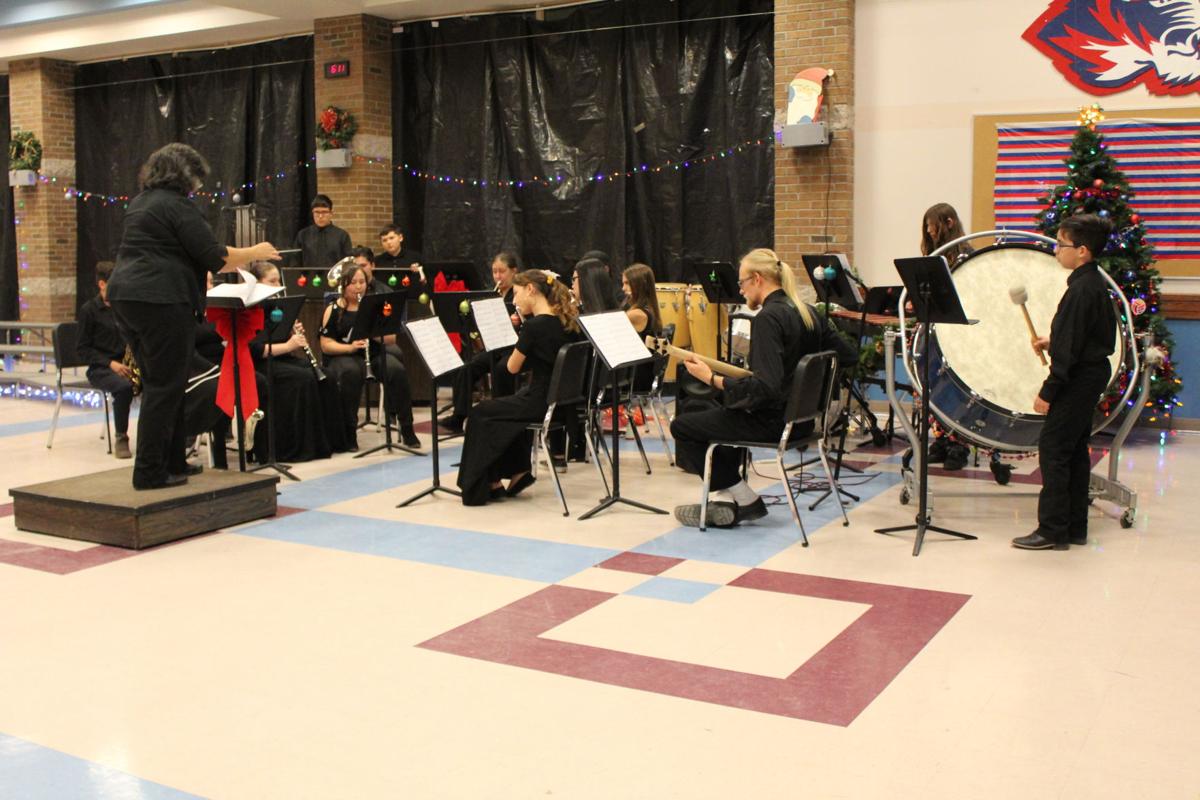 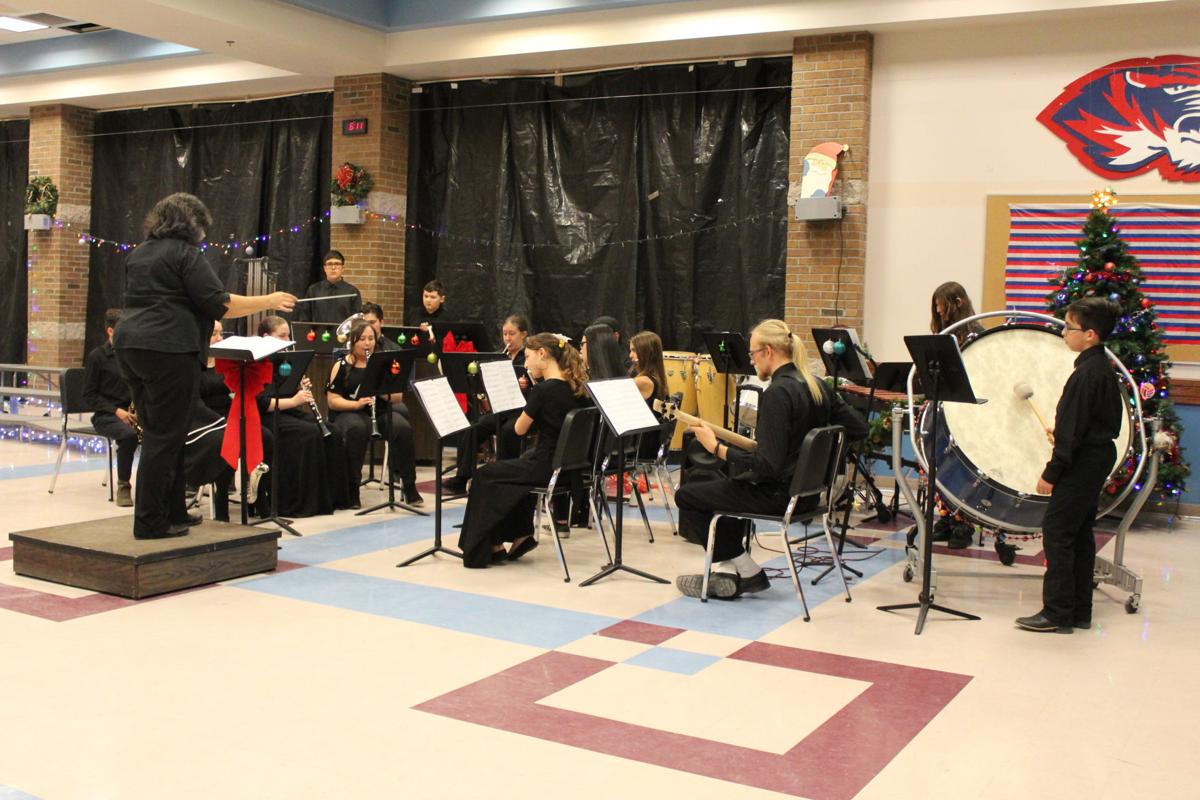 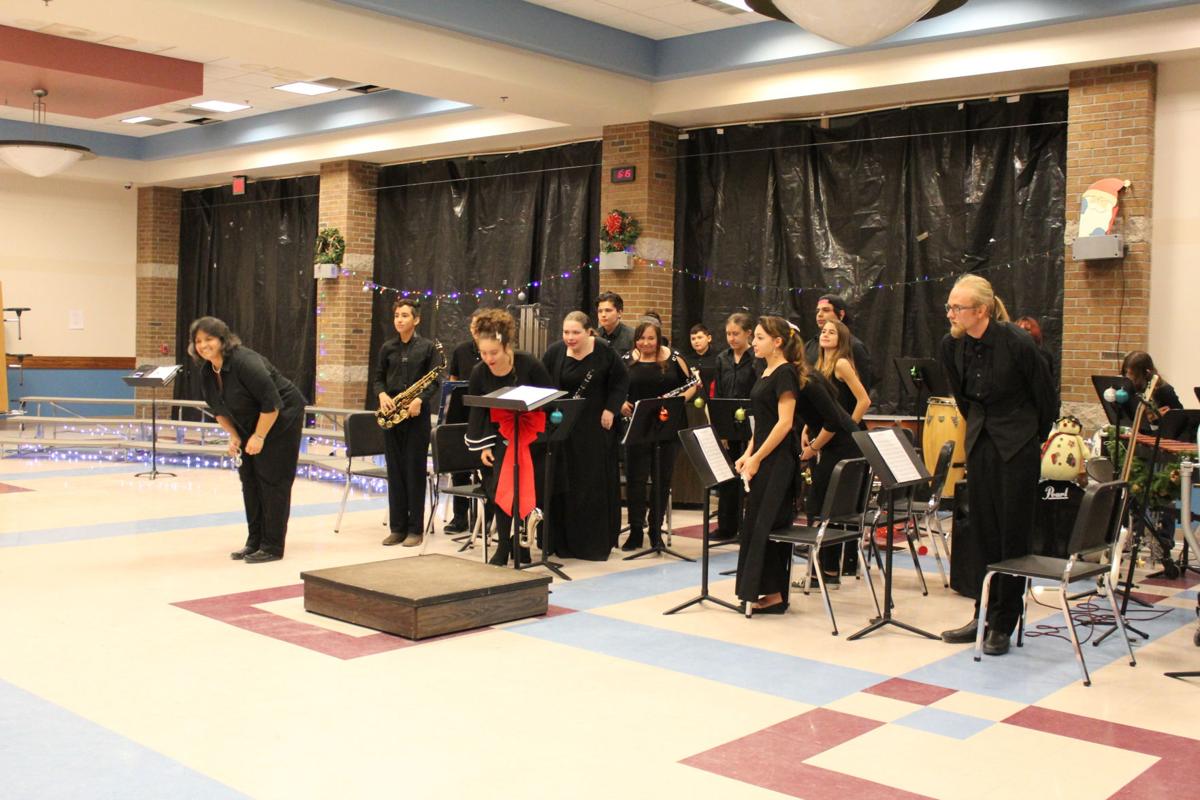 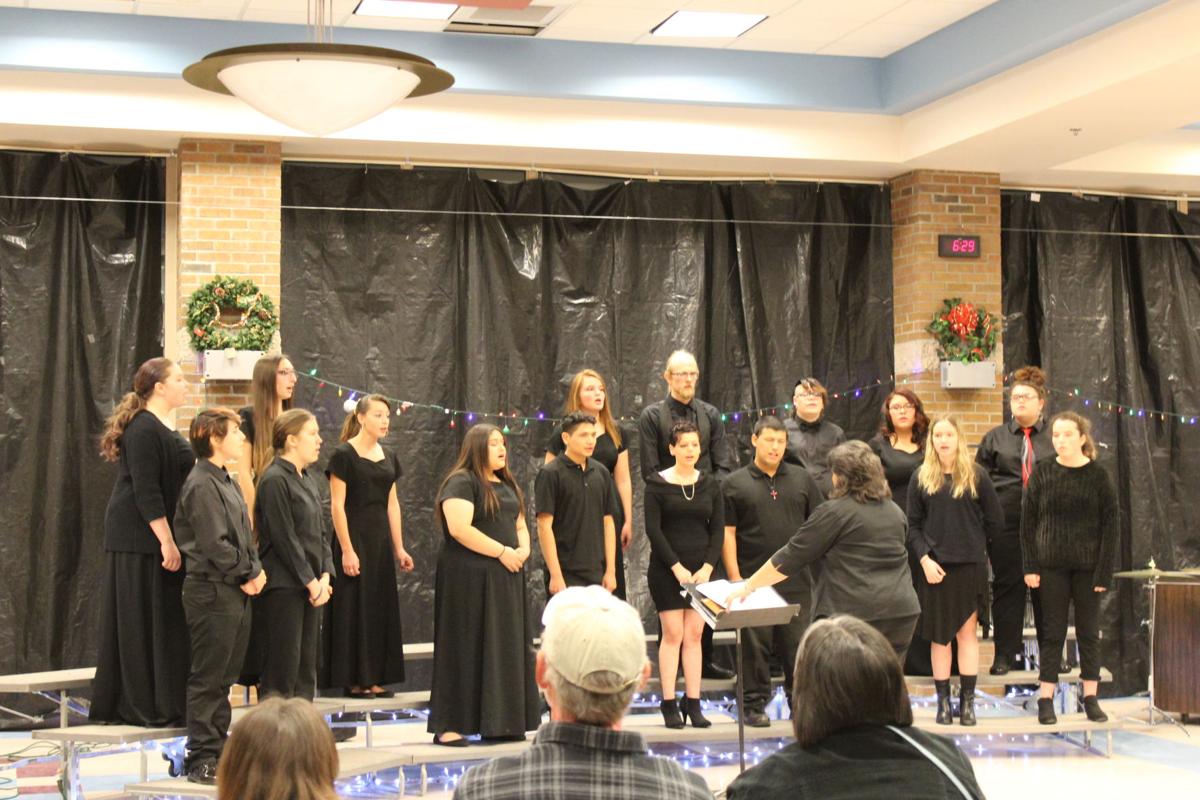 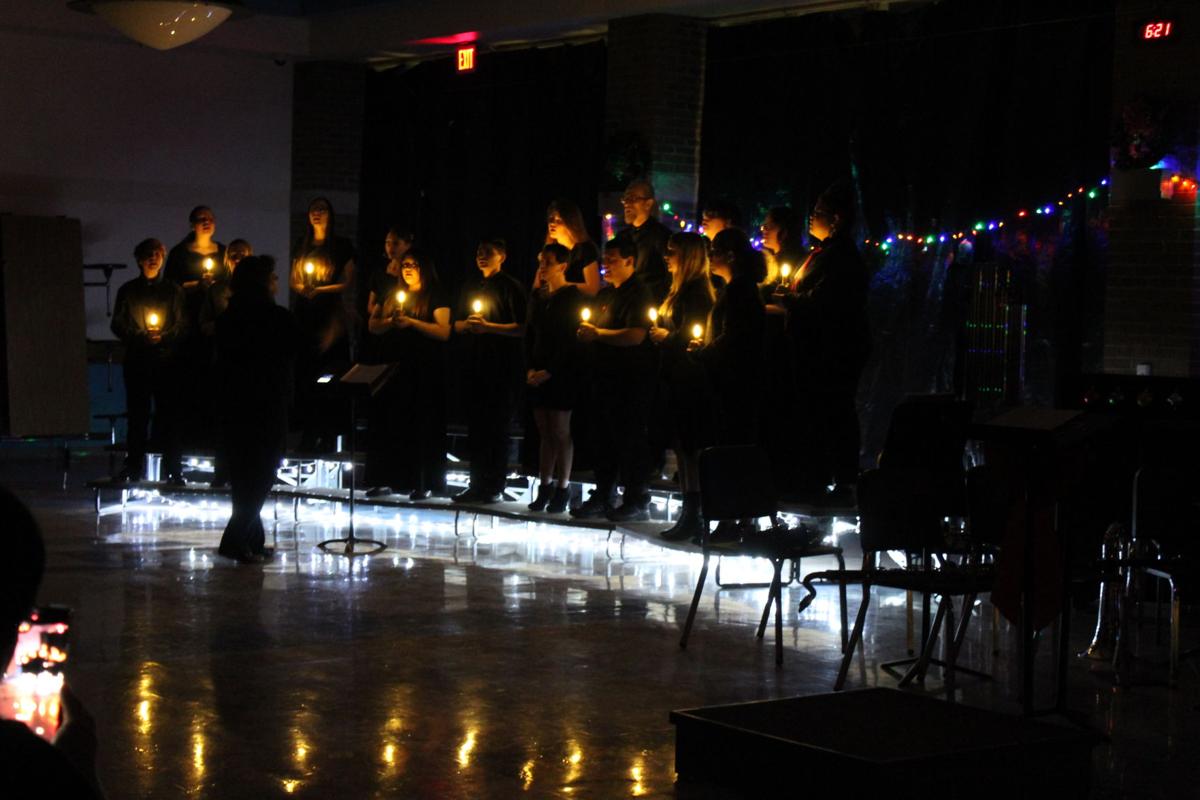 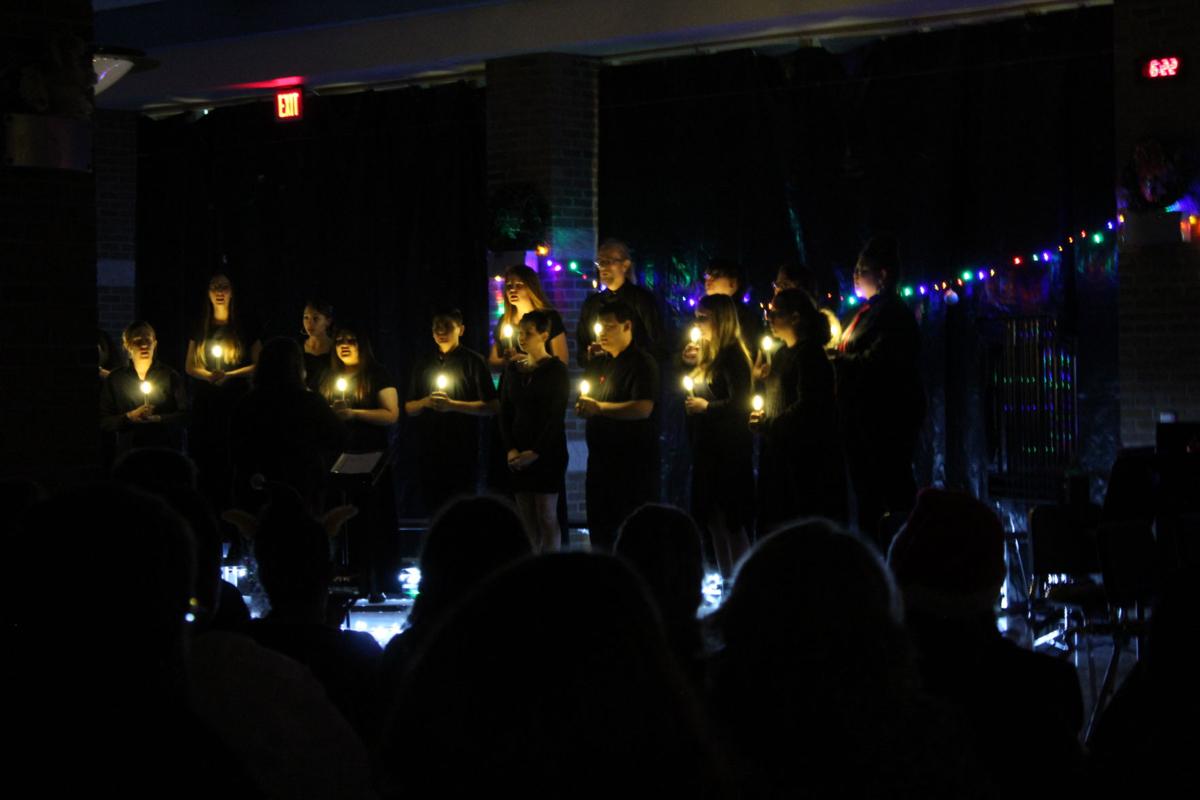 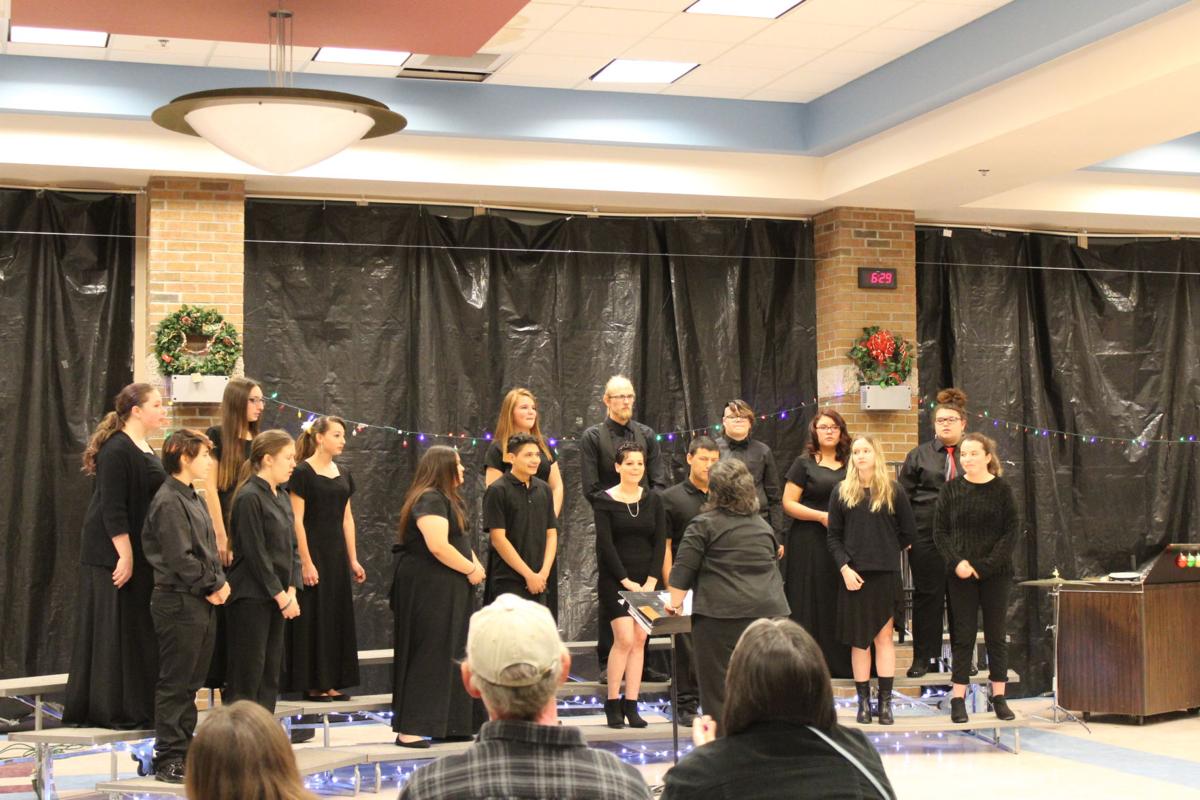 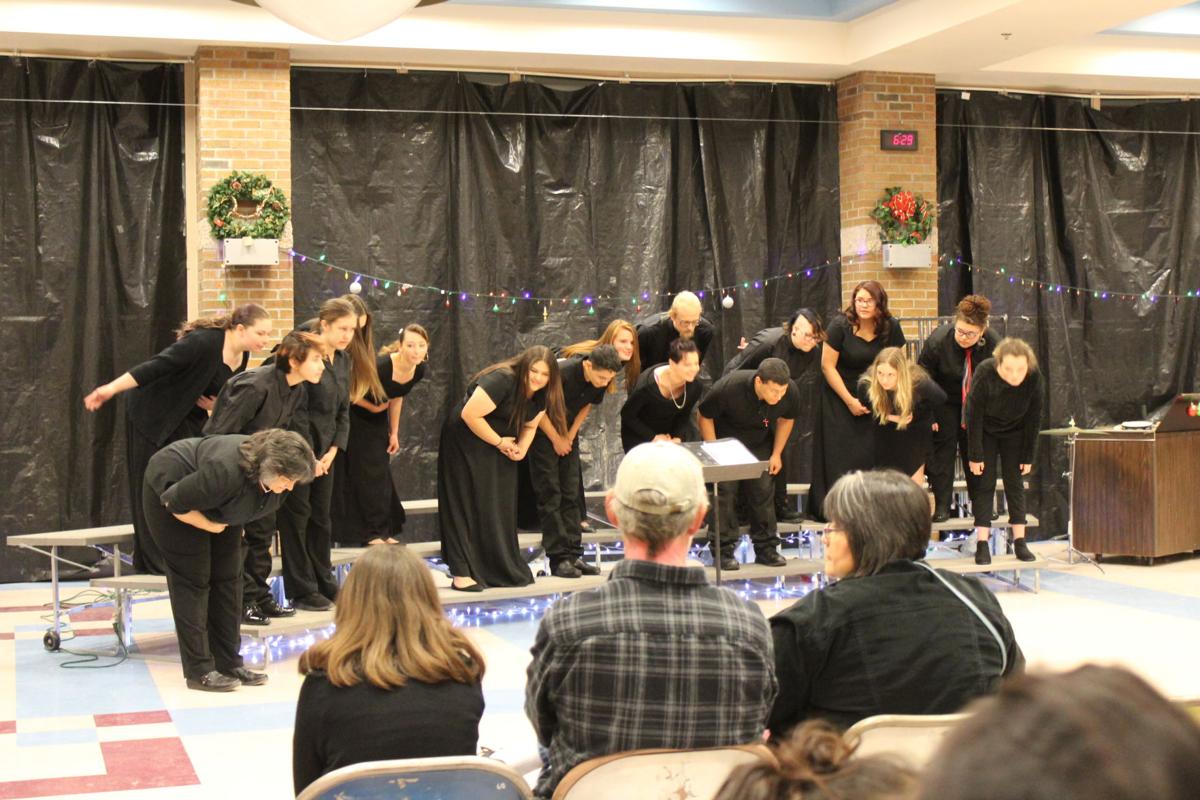 Hot Springs High rang with the sounds of the season Wednesday, with the band, and both the high school and middle school choirs performing a beautiful program of traditional and contemporary songs. The high school cafeteria was decked out and filled nearly to capacity with parents, students and others from the community, ready to enjoy the concert.

The T-or-C Middle School Coir led off the evening of music starting things off with “Rockin’ with Santa,” a medley arranged by Mac Huff. With the audience warmed up, the choir quickly shifted gears with a beautiful rendition of “Silver Bells,” followed by “Somewhere in my memory.” They closed off their portion of the show with a jaunty, “Parade of the wooden soldiers.”

With the ice broken by the middle school songsters, and beginning jitters put behind them, the initial nervousness some of the musicians and vocalists might have been feeling gave way, and they embraced their role on stage with enthusiasm.

As the stage shifted over to the high school band, and then choir, band conductor and hot Springs High music teacher, Carmella Barreras introduced each of the seniors. Standing for a quick bow were, Joshua Bailey Kaleb Carreon, Kodi Hayhurst and Josh Tolley.

The second portion of the night was filled with the symphonic sounds of the Hot Springs High band. Here the small but impressive group of musicians, with carefully selected pieces, put their talents on display to good effect. Kicking off with “Christmas is coming!” Recognized by most all in the audience, the tune had everyone captured from the first bar.

With the audience swaying to the tune the percussive introduction led into a beautiful arrangement that left everyone wanting more. The band did not disappoint. They segued into Jerry Brubaker’s arrangement of “Fantasy on the Coventry Carol,” a contemporary take on the traditional classic. The band closed out their portion of the evening with “Feliz Navidad,” which of course, everyone present knew very well.

Finally, it was the turn of the high school choir, who would close out the evening of song and fun. With voices harmonizing beautifully, they opened with a favorite of many, “Carol of the bells.” Capturing the energy and intricacy of the song, it was a great opening to their performance. “By candlelight,” was the centerpiece of the choir’s three-piece performance, which was closed out by a return, to echo part of the band’s selections, singing “The Coventry Carol.” The choir, with its lovely blending of voices, captured the mood of the season and the evening perfectly.

Through the selection of songs, and lovely arrangements, both choirs and the band as well, gave the audience a concert that could rival any they had heard. Both the focus and attention to which all those on stage gave to the concert, lent a sheen of professionalism to an evening of fun.