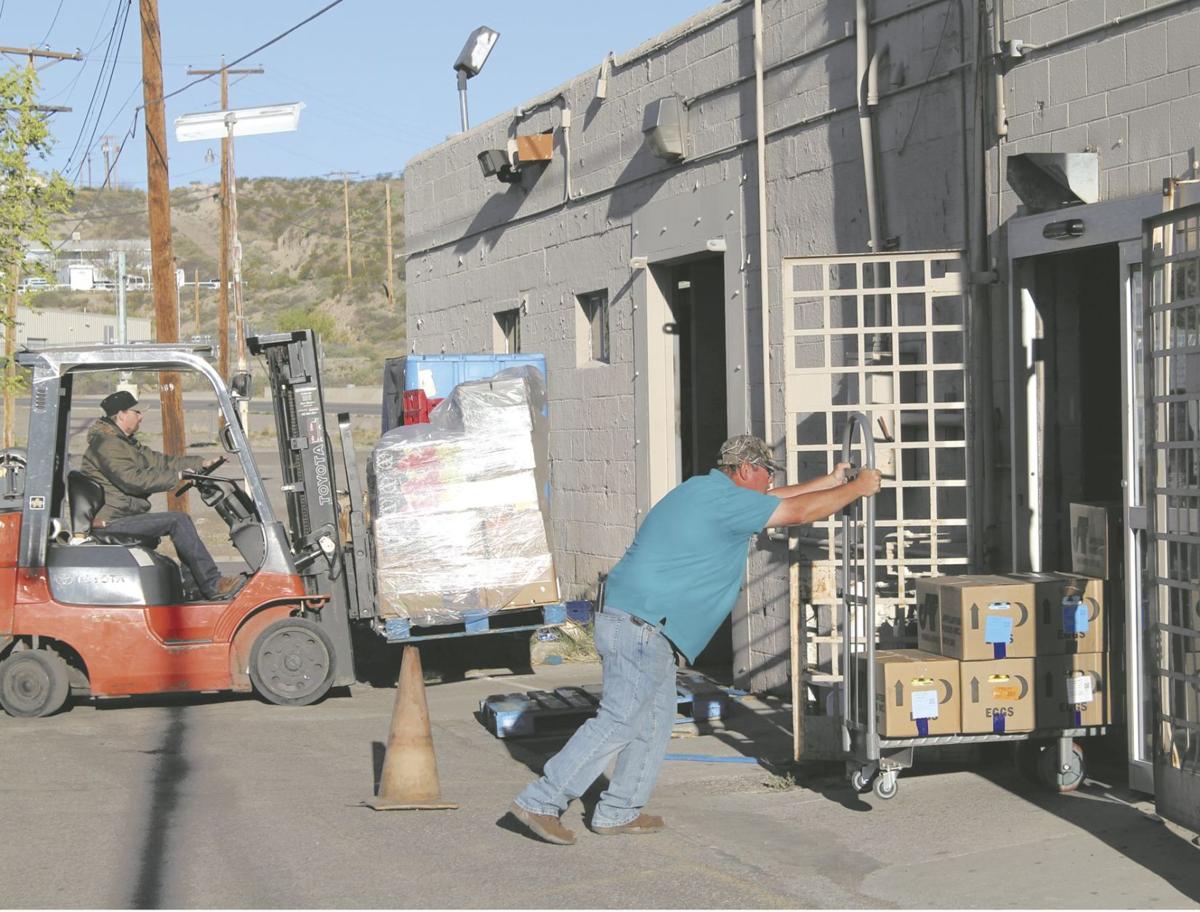 FEEDING THE COMMUNITY - It’s all hands on deck at Bullocks when the delivery truck comes in. Deliveries are still being made on schedule at the community’s grocery. 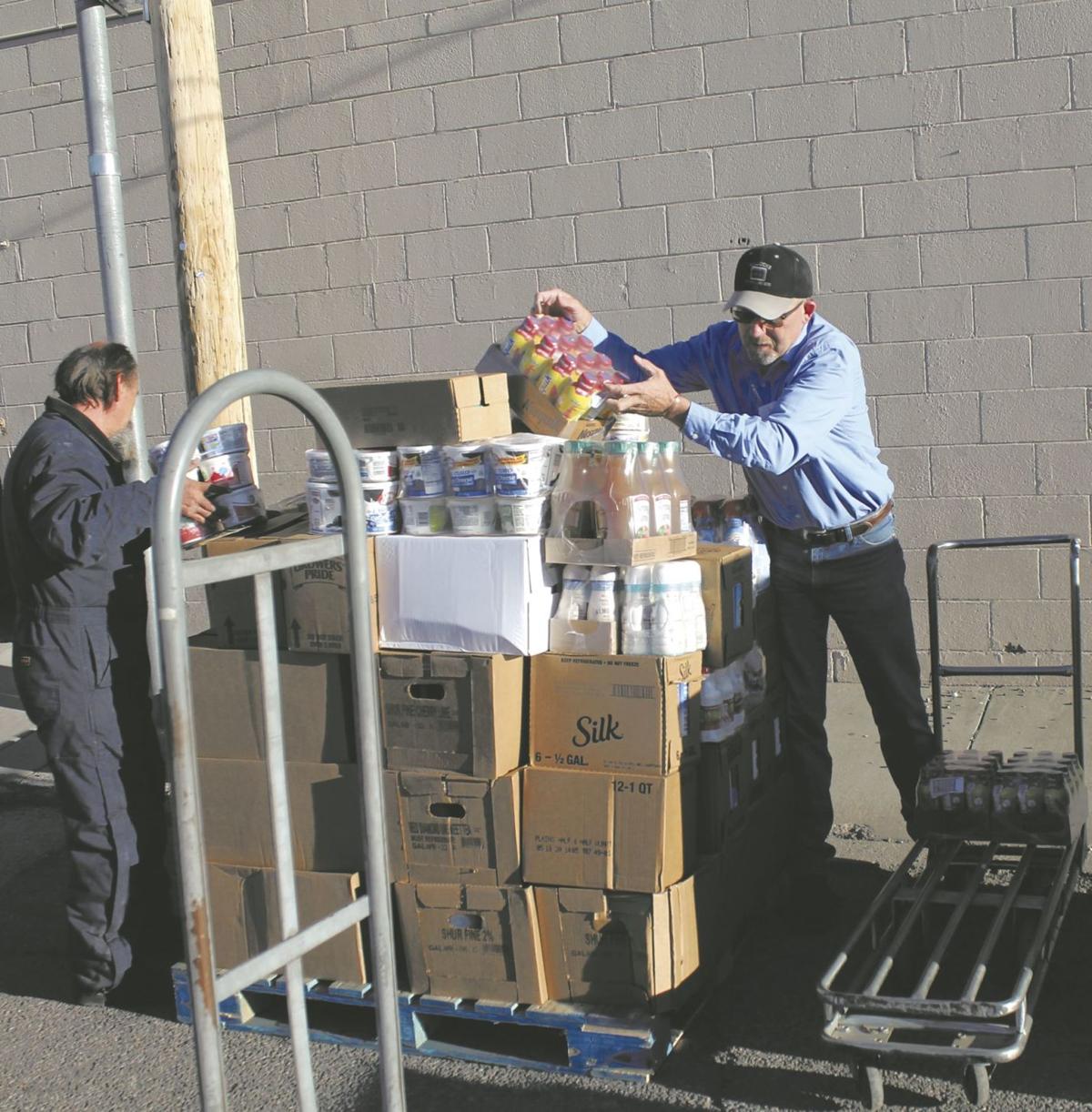 LEADING FROM THE FRONT - Bullock’s general manager, Forest Hill working with his crew to get the products in from a delivery truck, in the early morning hours recently.

FEEDING THE COMMUNITY - It’s all hands on deck at Bullocks when the delivery truck comes in. Deliveries are still being made on schedule at the community’s grocery.

LEADING FROM THE FRONT - Bullock’s general manager, Forest Hill working with his crew to get the products in from a delivery truck, in the early morning hours recently.

For 74 years, Bullocks grocery has been at the center of the Sierra County community. Dropping into their grocery store is always a friendly experience. This has never been both as noticeable nor more important than it is now.

The past couple of weeks, as one could imagine, it’s pretty much non-stop work at Bullocks. “We haven’t had a chance to breathe,” Forest Hill, Bullocks general manager told me when I finally caught up with him. “We have such a great staff here,” he said of the 54 current employees at the grocery. “We’ve had no one out sick, and everyone has been working extra hours or extra days. The whole team is extraordinary. They’ve been serving 1,500 customers a day for two weeks now.”

Even before the COVID-19 outbreak, Bullocks had always been one of the pillars of the community. Over the years they have been at the forefront whenever there was a need. Whether it was buying animals from our kids at the county fair’s livestock auction, the cash for clubs’ initiative, the Christmas Luminaria Walk and so much more.

Countless Tiger and community sports teams have benefited from Bullock’s quiet efforts. From direct donations, to deals on food for fundraisers, Little League, soccer, basketball, football and all the rest have benefited from their generous sense of community. Behind the scenes, because Forest avoids the limelight and accolades, Bullocks is there at every turn, stepping up and lending a hand.

Now, with the current developments having such an impact locally, as they are across the country, the Bullocks team has been stepping up again, in their own quiet way, to serve the community that they love, live in and have been at the center of for so long.

“It was like a light switch got flipped, on March 13,” Forest said. “Demand went through the roof and it just hasn’t stopped.” Forest has been the thick of it just about every minute since then. He is there long before the sun comes up and is with the last ones leaving at night, turning out the lights. “I can’t say it enough,” he told me. “The people we have working here, they’re the best, and have really come through. I have to say too, we have had almost no problem from customers. Even with needing to put limits on how much they can buy of some items, they have been patient and understanding, with very few exceptions.”

Nurse shows how fast germs spread even with gloves

It makes a difference of course, that Forest and this team of hometown heroes know so many of those who shop there. You see it all day long. People greeted by name and with smiles. Sometimes family extends to an entire community. That’s the way they like it at the community’s grocery.

Even with so many items going quickly off the shelves, Forest says there is no problem with the supply chain, which he totes as being one of the best in the nation. “We were getting deliveries three times a week from our main supplier, Affiliated Foods, out of Amarillo. That’s down to two but only because they’ve been putting in 19-hour days and were exhausted. They needed to give their people a day off to rest.”

“We’re still getting our deliveries though. Two a week and another if we need it. Sometimes they’re running a little late. Yesterday’s truck had 45 pallets of products for us. They were supposed to pull in at four in the morning and didn’t get here until 8, which makes everything a lot harder, trying to get it all in, and stock the shelves at the same time people are in trying to do their shopping.”

“There’s no reason to panic. I don’t see any problem in our supply. Buy what you need and leave some for your neighbors,” as Forest said. “If you know someone who can’t get out, try to help out and give something to them.” As always, Bullocks is ready to go the extra mile. “If there’s seniors or disabled or really whoever, that need assistance or have some special need, please just ask one of our staff. We’re always ready to help however we can.”

When we got done talking, it really came as no surprise that Forest had one last admonition. “Let’s be clear. This is really about the whole team here. They are the real stars. I’m just the one who’s in charge. Without all of them, well…” and with that, Forest’s voice trailed off. He came back clear and strong though. “I’m sort of like just the coach and a coach, well he’s nothing without the whole team.”

Some clouds early will give way to generally clear conditions overnight. Low 51F. Winds W at 10 to 20 mph.