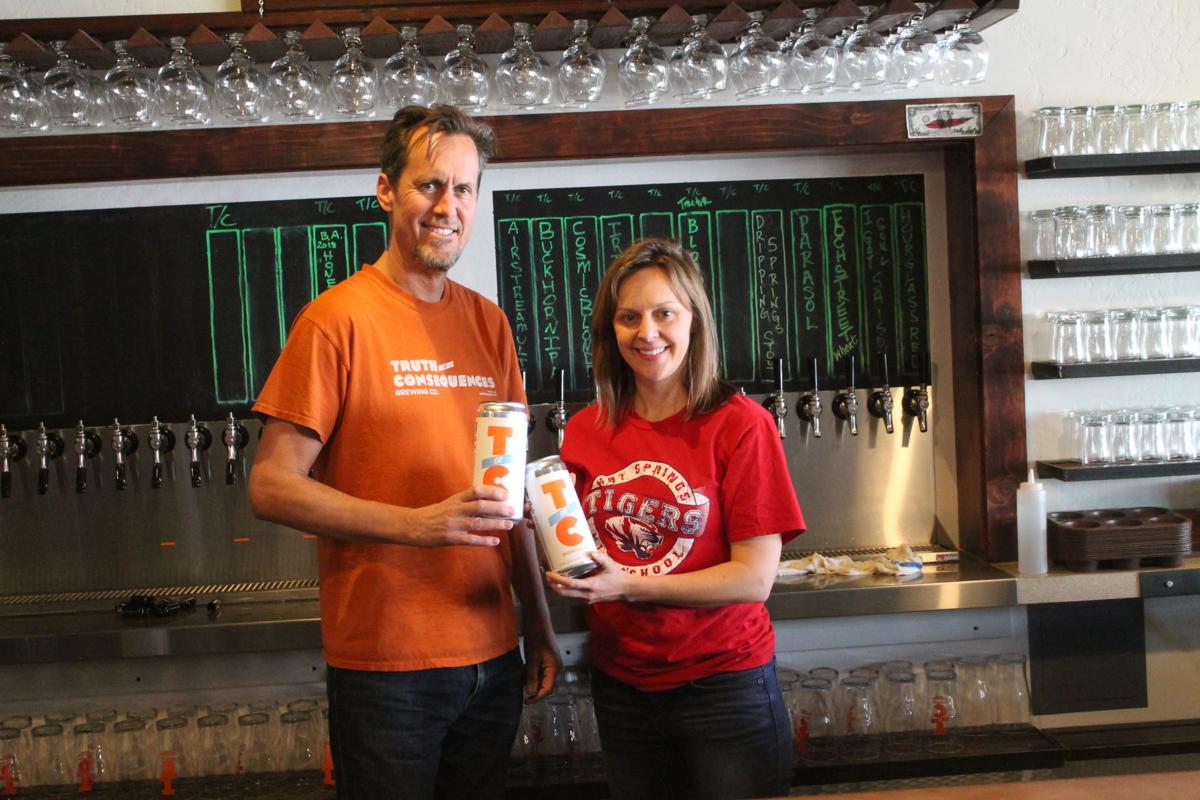 COMMITTED TO COMMUNITY - Working to keep the spirit of the community up, John Masterson, on left, and Marianne Blaue, owner/operators of T-or-C Brewing Company, take a minute to talk about how they reconfigured their business to keep serving the community as well as keeping all employees on board. 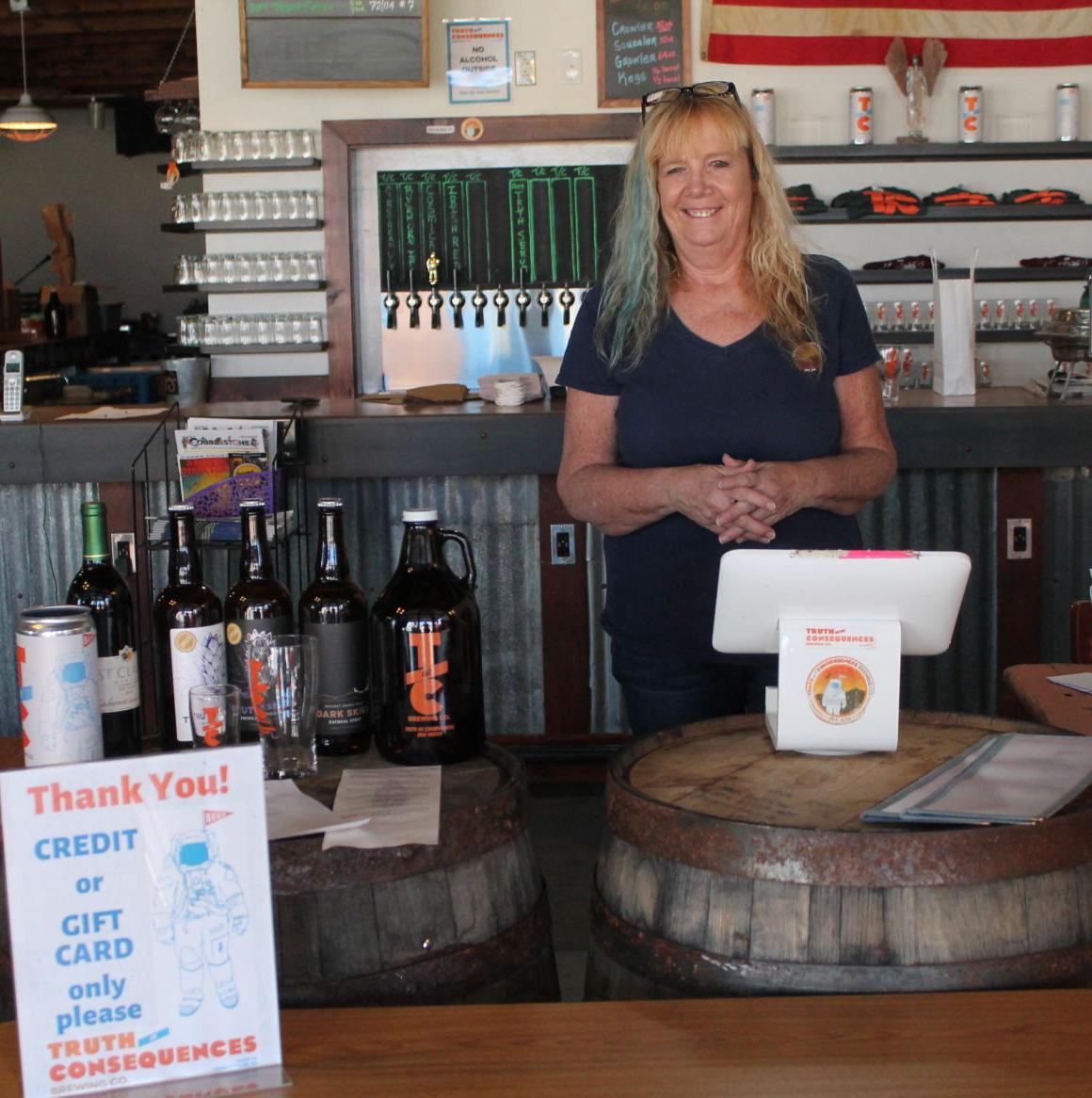 SMILES ON TAP - Taproom manager Susan Hafer, working the front of the house at the newly configured T-or-C Brewing Company, now serving beer to go as well as meals.

COMMITTED TO COMMUNITY - Working to keep the spirit of the community up, John Masterson, on left, and Marianne Blaue, owner/operators of T-or-C Brewing Company, take a minute to talk about how they reconfigured their business to keep serving the community as well as keeping all employees on board.

SMILES ON TAP - Taproom manager Susan Hafer, working the front of the house at the newly configured T-or-C Brewing Company, now serving beer to go as well as meals.

Even with the lights down low, the seats empty, and the usual nightly live music temporarily fallen silent, the team at the T-or-C Brewing Company’s Taproom is trying to fulfill a role they went a long way towards creating themselves, in Sierra County. The Brewery came on the scene three years ago and quickly established itself as a downtown destination spot and center of nightlife in the community. Now, in this period of sheltering at home and social distancing, the Brewery crew is still working hard preserve some of that feeling, both of neighborhood and friendly celebration, that has been their hallmark.

“When this started two weeks ago, we were scrambling,” T-or-C Brewery’s Chief Beer Officer, John Masterson told me when he had a minute to sit and catch his breath. “We were determined to keep the lights on and keep the entire team together.” The brewery and taproom had 22 employees when the order was passed down that such establishments could be open for takeaway and delivery only. Currently, though some hours have been reduced, they have 22 employees. Of course, some duties have been restructured. They have laid no one off.

John, along with General Manager Marianne Blaeu, moved here four years ago, captivated by the vibrancy and sense of community they found. They saw the potential for the sort of service they had in mind. “Our business model was to provide a relaxed and friendly gathering spot where people could meet and greet over a beer.” Even though that part of the plan is not possible just now, given the current restrictions on taprooms, John and Marianne can still fulfill their stated mission, to “make great beer and make people happy.”

More than just a business, they have found ways to serve the community they love. Partnering with the Tiger football team they sponsor the “Clean Up the Downtown” project. They have been active in partnering with businesses in the downtown to find ways in which they can help to make the community a better place for all.

As we sat and talked, across the wide table, the energy and exuberance of this couple was palpable. The enthusiasm with which they approach their mission was on full display. Their optimism and determination to continue in their efforts to both provide a quality product and to be a part of a warm, welcoming community, generous in spirit and innovative in approach, echoed through the taproom.

“We had to really think on the fly and refigure everything about how we operate. Our redesigned webpage now lets you order across our range of beers and pay for it online. We’re trying to eliminate cash transactions.” The front door to the taproom now has a table across, letting patrons approach and pick up their orders or place an order and wait for it to be prepared without going in, though still sheltered from weather by the patio that used to hold tables for customers.

Besides their own quality beers, a look at the ordering page of the website reveals meals to go as well, along with something else, unexpected and delightful. “We’re still looking at food,” John said of the meal items found on the menu. “We’re building partnerships with local businesses to provide foods, figuring out what works with what we do and with our customers. That will be something that’s changing as we go.” There was one other item on offer that I wasn’t expecting when I looked at their ordering page.

DC Bishop on Trump's photo-op: This was a charade

“There was one thing that people have traditionally turned to their neighborhood bartender for,” John told me. “They come in and find a friendly ear, across the bar.” You can go to the Brewery’s website and bend the ear of a bartender, in a virtual kind of way. Now THAT is innovative.

While we talked, customers came to the door to pick up their favorite beverage, exchange smiles and laughs from the doorway service point.

“The team has really stepped up, taking on other roles and helping to rethink the entire operation. Jacob over there,” John said, pointing out the man serving a couple who had come for their order. “He’s our lead brewer, now he’s on the serving end of things. A couple of our staff just felt safer working from home. We worked out ways for them to do that, and still stay an essential part of the team.”

The excitement John and Marianne brought with them when they moved to Sierra County remains. “We still want to keep growing, of course a lot is on pause right now.”

The couple has not only kept the local taproom open, but also the site they had only just opened in Las Cruces as part of their efforts to expand the brand, toward becoming brewing company offering high quality beer to the region. Plans to expand may have been paused, but they have in no way been abandoned.

When we finished talking, I ordered a crowler of beer to go. 32 ounces of Irish Red, one of nine available to choose from. After getting home I enjoyed it on the porch and watched the sun go down. Let me tell you, it was delicious.

For the Brewing Company right now, it’s a matter of sticking to the basics. Keep the team together and the lights on. The mission always remains the same. With others stepping up to help keep the food coming in and other essential services provided for, it’s equally important to remember that “Man does not live by bread alone.” The team at T-or-C Brewing Company and its downtown taproom remain as they always have been, dedicated to feeding the spirit of Sierra County.

Cloudy skies early, then partly cloudy after midnight. A stray afternoon thunderstorm is possible. Low 76F. S winds at 15 to 25 mph, decreasing to 5 to 10 mph.